Dead nuns are the worst, aren’t they? So creepy, and always chaining themselves to you so they can drag you to be baptized in the sinister black water of their baptismal font. Here are maps for an encounter with dead nuns! Also, a new spell for Shadow of the Demon Lord and stats for some spooky dead nuns below.

New spell for Shadow of the Demon Lord:

But, you ask: “what happens when someone actually gets baptized in the dark baptismal font?” Well, anything really; it depends on your campaign. Maybe they are spiritually bound to that location, and if they go more than a mile away they take a -10 penalty to Health until the enchantment can be removed. Maybe the nuns possess the poor soul causing 2d6 insanity, and if that is enough to drive them insane, the nuns take control of the victim’s body for 1d6+2 rounds. Maybe they get pulled into the baptismal water and taken to some terrible other reality. But whatever happens, it’s definitely a plot hook for future adventures.

WordPress.com is excited to announce our newest offering: a course just for beginning bloggers where you’ll learn everything you need to know about blogging from the most trusted experts in the industry. We have helped millions of blogs get up and running, we know what works, and we want you to to know everything we know. This course provides all the fundamental skills and inspiration you need to get your blog started, an interactive community forum, and content updated annually.

Roll 1d12 for a dumb character concept that will annoy your game master.

Rite of Passage, the Symbaroum campaign-starting adventure, has been translated into French!

This adventure, written by myself and Mitchell Wallace, is about the coming of age ritual of the mysterious Barbarian tribes. The young Barbarians must undergo three trials in the dark forest of Davokar, becoming true members of their tribes in the process.

Now, thanks to the fine translation work of Guillaume Parodi, Rite de Passage is available to the French RPG community!

There is a free tabletop RPG where you each create your raccoon (trash panda) as you all scramble to control a vehicle. You need to win the race, but raccoons aren’t good at communicating with each other; the game is chaotic, fast, and funny. Made by Grant Howitt, one page long, downloadable for free here: https://rowanrookanddecard.com/product/crash-pandas/.

As I was playing this game, I had to make fan art of my trash panda. He was was born under the light of a neon all-night diner sign while Justin Bieber’s catchy song “Baby” was playing, inspiring my mama to name me “Baby Baby Baby, Oooh” (but my friends just call me Baby).

The game is quite fun, I recommend it. Easy to learn, just get chaotic with it. Our game was set in Halloween Town from Nightmare Before Christmas.

A while ago, there was a reddit post seeking advice for improvising fantasy dungeons for a D&D or OSR-style game.

While I usually come in to each session with about an hour of prep, some of my favorite memories at the table are from RPG dungeons and adventures that I improvised with little-to-no prep time. It can be intensely rewarding to run improvised adventures, but self-doubt, faltering when unsure of what to do, and anxiety can lead to very unfun experiences at the table. After years of GMing, I have developed strategies for creating a simple, fun adventure when I don’t have time to prep like I usually do. Following these methods allow me to quickly come up with some ideas which I can riff off as we go through the adventure.

Steps for running a dungeon on five minutes prep:

Running a dungeon with half an hour of prep:

For a  30 minute prep dungeon, I do a similar process but I steal liberally from other sources.

An Apple A Day, my gross low-fantasy Shadow of the Demon Lord adventure is very close to being published on DrivethruRPG!

Filth, swarms of biting insects, and strange dinner habits, Dribbleton is a place most would avoid. And then there’s that horrid smell. This town’s large rusty cesspool seems to be infested with biting critters called slickers which have a nasty tendency to eat all nearby plants and spread moldy feces around town. With crops being eaten and animals being chased away, food is hard to come by. The solution? Lovely insectoid creatures called expultrixes, which eat slickers and produce delicious apples, the only dependable food source in the area! As it happens, a wild expultrix has been spotted outside of Dribbleton and the villagers will pay heartily if someone catches it for them! Just don’t let it get too close to your face, a wild expultrix is a nasty bugger. And remember, an apple a day keeps the doctor away.

An Apple A Day details the small village of Dribbleton and the strange people who live in this foul-smelling town, and includes expultrix stats and a host of interesting NPCs who could easily become recurring characters in a campaign. It is a adventure for expert characters (level  3-6), but it is low-combat so it could probably be used for characters of lower level. It has gone through writing, editing and playtesting, and now is in its final stages of art and layout.

Expect a post when An Apple A Day goes live! 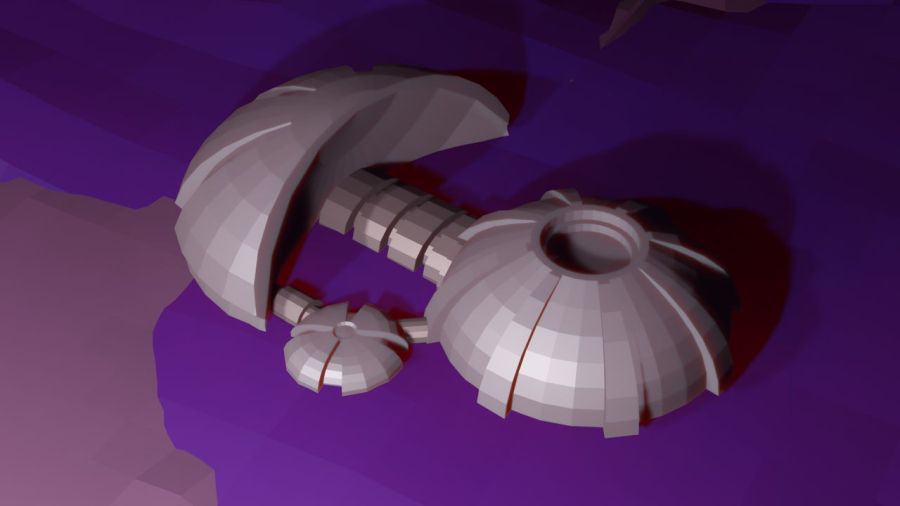 To visualize the progress of my group’s science fiction colony that we have been building for 15+ sessions, I have been experimenting with creating a 3D map of our Hyperion colony.

We have been going through the excellent Siren’s Call published campaign for the card-based Shadows Over Sol RPG. The campaign is epic in scope, and follows the first-ever colonists who dared to venture outside of Earth’s solar system. It introduces a truly tremendous setting on the planet Siren, in the Alpha Centauri system, full of bizarre life forms and thrilling science fiction exploration. I wanted a way to visualize their fragile settlement on a dangerous planet. Download the 3D model here!

The Siren’s Call campaign has a great colony building minigame, which allows the group to manage technology research, mining, nutrients and other aspects for the colony. As our campaign heads into its final chapter, we will see whether the colony manages to complete their research into orbital launches to put in place defenses against the incoming storm of solar radiation which threatens to wipe out human life on Siren.

Once we finish the Siren’s Call campaign, I will write up a breakdown of what changes I made to the published setting and adventures, and how I tailored the brilliantly-written campaign to fit our group style.

My local RPG group just finished a campaign of Changeling: The Lost 2e. It was set in modern-day Baltimore, Maryland, and our campaign involved a lot of travel to and from the Hedge. The Hedge is a twisted magic realm that parallels ours in bizarre ways, and is tied closely to changelings and those that hunt them. For this campaign, our group was creating a variety of portals to this dangerous realm, and the GM asked me to make a map to keep track of all of the gateways to the Hedge that we were creating in Baltimore. So I did.

These maps were made using OpenStreetMap data with the free Maperitive program to create the maps, using my own custom Maperitive ruleset and scripts which you can find here.
Icons are from the excellent Game-icons.net and are released with an Attribution 3.0 Unported (CC BY 3.0) license.

Rite of Passage was the adventure written by myself and Mitchell Wallace that won the Symbaroum Adventure Contest. It has been given beautiful art and layout, and you can get it free in all its glory here!

The adventure is takes place in the dark fantasy world of Symbaroum; it follows a mostly unexplored side of the setting, the barbarian tribes in the dangerous Davokar forest. You get to explore the traditions and culture of the different tribes as the player characters go through the three trials of the barbarian coming-of-age-ceremony. (Watch one of the writers run Rite of Passage on Penny For A Tale!)

The adventure is pensive and meant to introduce players to the world of Symbaroum to start a campaign, and we are very proud of it. Enjoy!

Several months ago at a tiny RPG convention in Baltimore I met Laura Ketcham, a talented local artist. After talking with her at her booth, I purchased a print of her Pack of Horrors, a set of cards with unique, creepy system-agnostic monsters for tabletop RPGs; flipping through them fills my mind with ideas of using them in a game.

I may try using them as a form of in-game tarot cards. The GM would present the players with a eerie fortune teller or royal soothsayer. With some intricate-yet-meaningless showmanship (chanting, sorting the cards into seven piles and asking each player to focus their energy through the cards, etc), the soothsayer would place four face-down cards, asking two players to each select a card, which are discarded. The two remaining cards are flipped face-up, and an ominous warning is given about the nature of the creatures that they will soon encounter; the soothsayer thematically explains the info printed on the card, like “Witnesses claim sunlight kills them”. 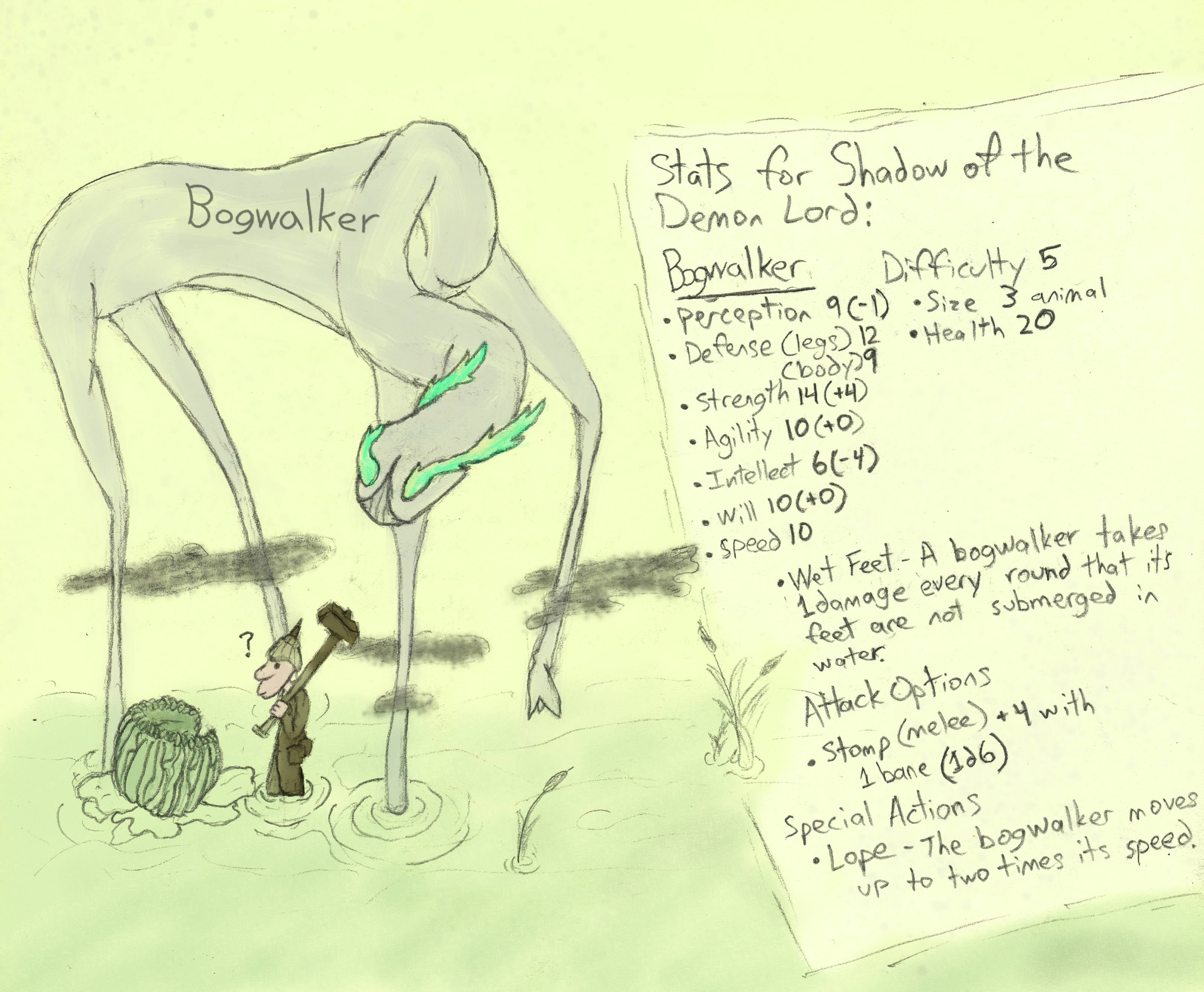 While you could easily substitute stats of similar creatures, sometimes its fun to make the stats. Above are the quick sketch and handwritten stats for the bogwalker, a mostly docile creature that can be mounted and ridden through the swamp.

You can get PDFs of Laura Ketcham’s Pack of Horrors here, I highly recommend them.